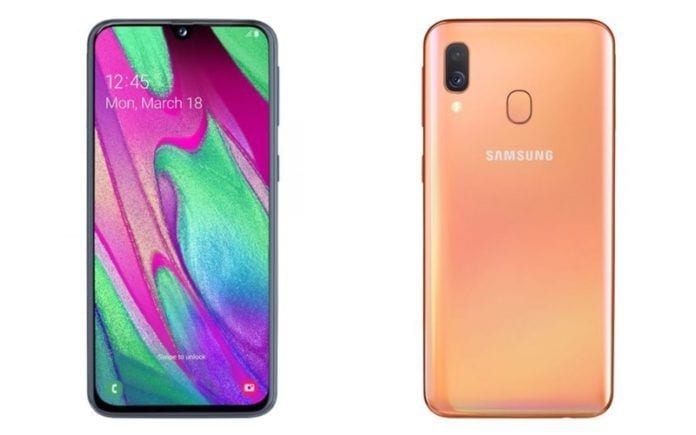 There is a dual-camera 16MP+5MP on the back and a selfie camera 25MP on the front.

We are now in April, so far eight new A-series smartphones have been released by Samsung, Six of them sold in the Netherlands. The new A40 is also part of the budget segment and the device receives a € 250 retail price as suggested. The Galaxy A40 has excellent value for money.

This phone having a 3,100 mAh battery to support fast 15W charging for energy supply. Consumers buying the Galaxy A40 have four colors to choose from; black, blue, white and orange.

Samsung is on a roll with smartphones from the Galaxy-A series. They have already launched the Samsung Galaxy A50, Samsung Galaxy A70, Samsung Galaxy A80 and Other. Recently, the essential version of the new A-series spotted on the website of the ‘ WiFi Alliance,’ and therefore the phone launch could only be around the corner.

Samsung A50 – One of the first smartphones of Galaxy A 2019
Ready, Action! Since March, the device has been available and received a proposed retail price of € 350. The A50 is the cheapest fingerprint scanner model on display.

Samsung A70 – Shows many similarities to the top model of Samsung

The Samsung Galaxy A70 is one of the unique devices. More expensive Galaxy S10 5G has taken over various functions from this smartphone. The A70 has chosen a cheaper alternative, a notch.

Samsung Galaxy A80 – First Smartphone with a Rotating Camera System
A80 is the most expensive model of the A-series. The Galaxy A80 has a 6.7-inch display of the so-called New Infinity.

Samsung phones have merged into the series Galaxy A. From cheap budget models to advanced mid-range smartphones; the new model range looks complete in 2019. Know complete specifications, features of Samsung Galaxy A40