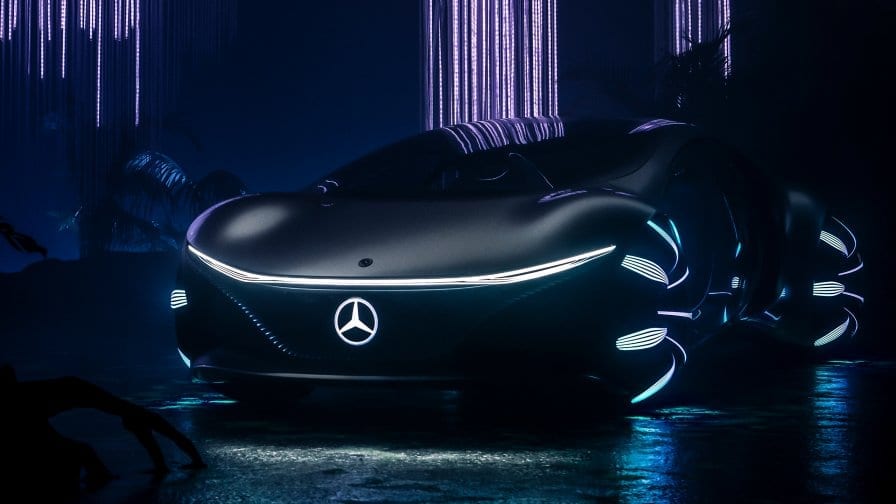 Tech companies around the world are showcasing future products at the CES running in Las Vegas, USA. In the same show, the giant automobile company Mercedes-Benz has also introduced its concept car Mercedes Benz VISION AVTR.

The features of the car are inspired by the famous science fiction film AVATAR which came in the year 2009. Its design also looks based on the theme of this movie.

It is a concept car. By introducing this car Mercedes-Benz has proven its potential to create a high-tech futuristic car.
Undoubtedly, the team making this car deserves congratulations.

The design of the Mercedes-Benz VISION AVTR is entirely inspired by the film AVATAR.
Not only this but also the film Avatar’s director & producer James Cameron has been involved in making the design of the car.

It can move sideways by approx. 30 degrees, compared to traditional cars.
This feature makes it a movement like “crab movement” which gives the concept car a reptilian appearance even while moving.

Its wheels have been specially designed. According to the company, these wheels are inspired by the “seeds of the tree of souls” of the film.

The rear of the car is covered with “bionic flex” which can be used to talk with people outside the car.

Mercedes-Benz claims that with a combined engine power of more than 350 KW, the VISION AVTR has set a new benchmark for EQ power.

The car is full of surprising features.
It does not have a steering wheel. The company says that it is an autonomous car in the future.

There is a controller in the car through which people can talk to this car.

When the car starts moving, 3D graphics will appear on the big screen in the car which will take the people sitting in the car to the imaginary world of another planet of the film AVATAR.

You may remember that the focus of the film AVATAR was to give the world the message of conservation of nature.
Since this car is entirely based on the theme of that film, the Mercedes has also made an attempt to make its car eco-friendly by using eco-friendly material in the car.

The interior of the car uses recycled plastic and vegan leather.
Additionally, Graphene-based battery cells will be used to drive the car. It is noteworthy that the rare minerals are not needed to make these cells. Not only this, according to the company, these sales will also be converted into fertilizer later. That is, the company has been trying its best to use eco-friendly material in the car.

Today the world is searching for an alternative to the oil. It is believed that the future is of electric vehicles. This will not only eliminate dependence on oil but will also reduce pollution.

In view of this, many car manufacture companies are emphasizing to make electric power-driven cars. In the future, we are going to get different fantastic electric cars like Audi e-Tron, Sony Vision S and Ford’s Mustang Mach E 2021, etc.

At such a time, Mercedes has shown a glimpse of a car whose theme is inspired by a film that is itself a symbol of conservation of nature.
While the car is equipped with high technology and fantastic features, on the one hand, its theme and design, on the other hand, make it feel eco-friendly.